Get the latest updates, news and product offers via email

ATEX is a standard for equipment intended for use in places with a potentially explosive atmosphere. This is a central concern for the European Union. For this reason, the EU has taken the initiative of drawing up standards, which are gradually becoming generally referred to as ATEX directives (ATmosphères EXplosives). These directives apply to all electrical and non-electrical equipment and protective systems, as well as to machinery and industrial plants that can be associated with potentially explosive atmospheres.

Since July 2003, only equipment that demonstrably complies with the ATEX directives may be used in Europe.

Explosive atmospheres in the workplace can be caused by flammable gases, mists or vapors or by combustible dusts. Explosions can lead to loss of life and cause serious injuries and significant damage.

Explosive atmospheres can be caused by flammable gases, mists or vapors or by combustible dust. If there is enough of the substance mixed with air, then all it takes is an ignition source to cause an explosion.

Explosions can result in loss of life and cause serious injury and significant damage. Preventing the release of hazardous substances, which can create an explosive atmosphere, and preventing ignition sources are two common ways to reduce risk. Using the right equipment can be a great help in this regard.

What is an explosive atmosphere?

An explosive atmosphere is defined as a mixture of hazardous substances with air, under atmospheric conditions, in the form of gases, vapors, mist or dust in which, after ignition has occurred, combustion spreads to the entire unburned mixture.

Where can explosive atmospheres be found?

ATEX is the name commonly given to the two European directives for the control of explosive atmospheres:

1) Directive 99/92/EC (also known as "ATEX 137" or the "ATEX Workplace Directive") on minimum requirements for improving the health protection and safety of workers potentially at risk from explosive atmospheres. The text of the Directive and the supporting guidelines prepared by the EU are available on the EU website.

2) Directive 94/9/EC (also known as "ATEX 95" or "the ATEX Equipment Directive") on the approximation of the laws of the Member States concerning equipment and protective systems intended for use in potentially explosive atmospheres. The text of the Directive and the supporting guidance prepared by the EU are available on the EU website.

Equipment and protective systems intended for use in potentially explosive atmospheres

Directive 94/9/EC aims to allow free trade in ATEX equipment and protective systems within the EU by removing the need for separate testing and documentation for each Member State.

The regulations apply to all equipment intended for use in explosive atmospheres, both electrical and mechanical, and also to protective systems.

Manufacturers/suppliers (or importers, if the manufacturers are located outside the EU) must ensure that their products meet the essential health and safety requirements and undergo the appropriate conformity procedures. This usually involves testing and certification by a "third party" certification body (known as a notified body), but manufacturers/suppliers can also self-certify devices intended for use in less hazardous explosive environments. Once certified, the equipment is marked with the "EX" symbol to identify it as such.

Certification ensures that the equipment or protective systems are fit for their intended purpose and that sufficient information is included to ensure that they can be used safely.

A distinction is made between:

Primary explosion protection
These are measures that are immediately directed against the explosion hazard, since they totally prevent or limit the explosive mixture occurring.

Secondary explosion protection
This is the designation for a second group of measures which prevent the ignition of an explosive mixture.

When does ATEX apply?

The ATEX directive applies when during normal use or malfunctioning of a machine and/or installation danger of explosion can occur. Calamities do not fall under this. The new directive (94/9/EG + 99/92/EG) replaces the directives 76/117/EEG and 82/130/EEG. Directive 94/9/EG is meant for the manufacturing of installations, directive 99/92/EG is meant for working in an explosive environment (work safety). This ATEX Directive covers all potentially explosive atmospheres which may be caused by gases, vapour, mist or dust.

Excluded from the ATEX directive are:

In addition to equipment and protective systems intended for use in potentially explosive environments, items outside these environments are also covered if they are required for the safe functioning of the equipment.

When is a potentially explosive atmosphere?

If the correct ratio of oxygen, flammable product and ignition source is possible. An atmosphere is explosive from the LEL to the UEL.

For almost all products safety data sheets can be obtained, in which all necessary information such as the LEL, UEL, flash point, etc. can be found. The flash point is also a very important criterion. We have reproduced below a part of two safety data sheets on very well-known products, namely Acetone and Diesel.

The lowest liquid temperature at which a liquid, under certain normalized conditions, develops so much vapor that an ignitable vapor/air mixture can be formed. One must take into account at normal atmospheric conditions of an ambient temperature of -20°C up to and including +40°C, counting 10°C reserve then one arrives at +50°C. In principle all products from a flash point of 50°C or higher such as diesel are not explosive. Of course there are circumstances that these can reach an explosive atmosphere, for example by certain production processes (atomization etc...).

Definition of "LEL" and "UEL".

Lower explosion limit (LEL): Concentration of flammable gas, flammable vapor or flammable mist in air below which no explosive atmosphere is formed.

Upper Explosive Limit (UEL): Concentration of flammable gas, flammable vapor, or flammable mist in air above which an explosive atmosphere is not formed.

When a product has an LEL of 15% or more (such as ammonia), no hazard zone classification will be made for outdoor installations. This is because it is not possible that in practice higher concentrations than 15% will occur due to the mixing of the outside air. Consequently, an ammonia installation in the open air is not covered by the ATEX directive, despite the fact that it is a gas. 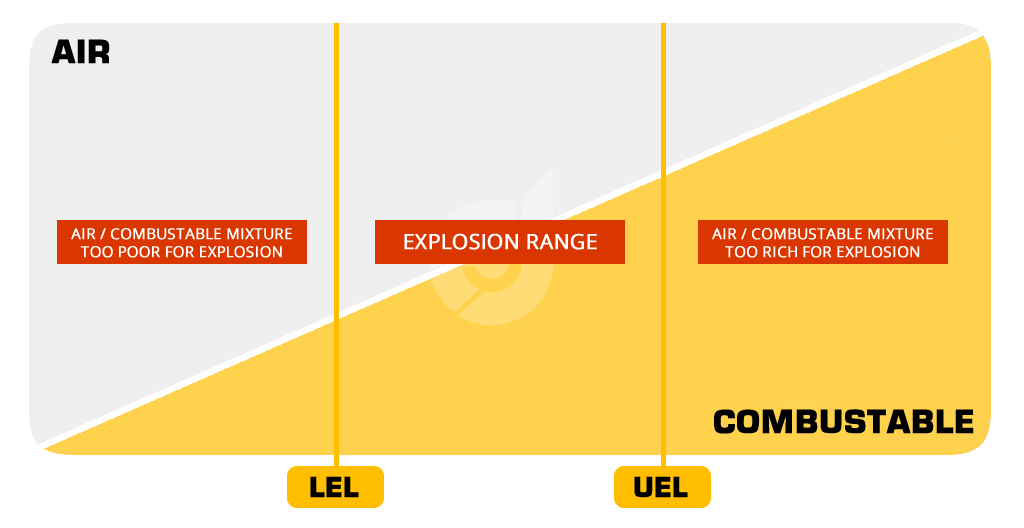 When are you subject to the ATEX directive?

For products with a lower LEL than 15% and a lower flash point than 50°C, one can speak of a potentially explosive atmosphere. In this case one falls under the ATEX Directive and is therefore obliged to make a zone classification according to the applicable guidelines and standards. All materials must also comply with the ATEX Directive.

Wherever flammable substances are produced, processed, transported or stored, safety plays a particularly important role - especially in the chemical and petrochemical industries, in natural gas and oil extraction and in mining.

With the aim of ensuring the highest possible level of safety in these sectors, in line with this, the legislatures of most states have established regulations in the form of laws, ordinances and standards. These must now be declared by the companies, as the operator of a complex is solely responsible for safe operation under occupational safety regulations.

The company's obligations therefore include the following:

Defining the places where explosive atmospheres may occur (zones),
drawing up an explosion protection document
implementation of organizational and technical measures to promote explosion protection
Carrying out checks,
Use of products in hazardous places that meet the requirements of the ATEX 95 directive.

Environment with hazardous gas, vapour and mist: ATEX zone 1 and 2

A great example of an ATEX Zone 1 or ATEX Zone 2 rated plant is a chemical or petrochemical plant, where there is an elevated risk of an explosion during normal day-to-day activities. In a hazardous gas environment, an explosion can occur if a flammable component, an oxidizer and an initiating source are found at the same time in the atmosphere. The absence of any of these three elements would stop an explosion, and therefore through continued innovation and increased attention to safety, the industry can offer a comprehensive range of explosion proof equipment designed for use specifically in these hazardous atmospheres.

ATEX zones 21 and 22 are specific to hazardous dust atmospheres, such as those found in the food industry in a flour mill, for example, where explosive dusts are frequently present. Some examples of explosive dusts within the food industry besides flour are custard powder, instant coffee, sugars, dehydrated milk, powdered potatoes and powdered soups, because a solid that is finely grinded can more easily or at a lower energy ignite. The risk in the food industry with hazardous gas environments is that if a flammable substance is mixed or suspended in air at the proper concentrations and is in a vessel or building, when an ignition takes place, the result can be a severe explosion. 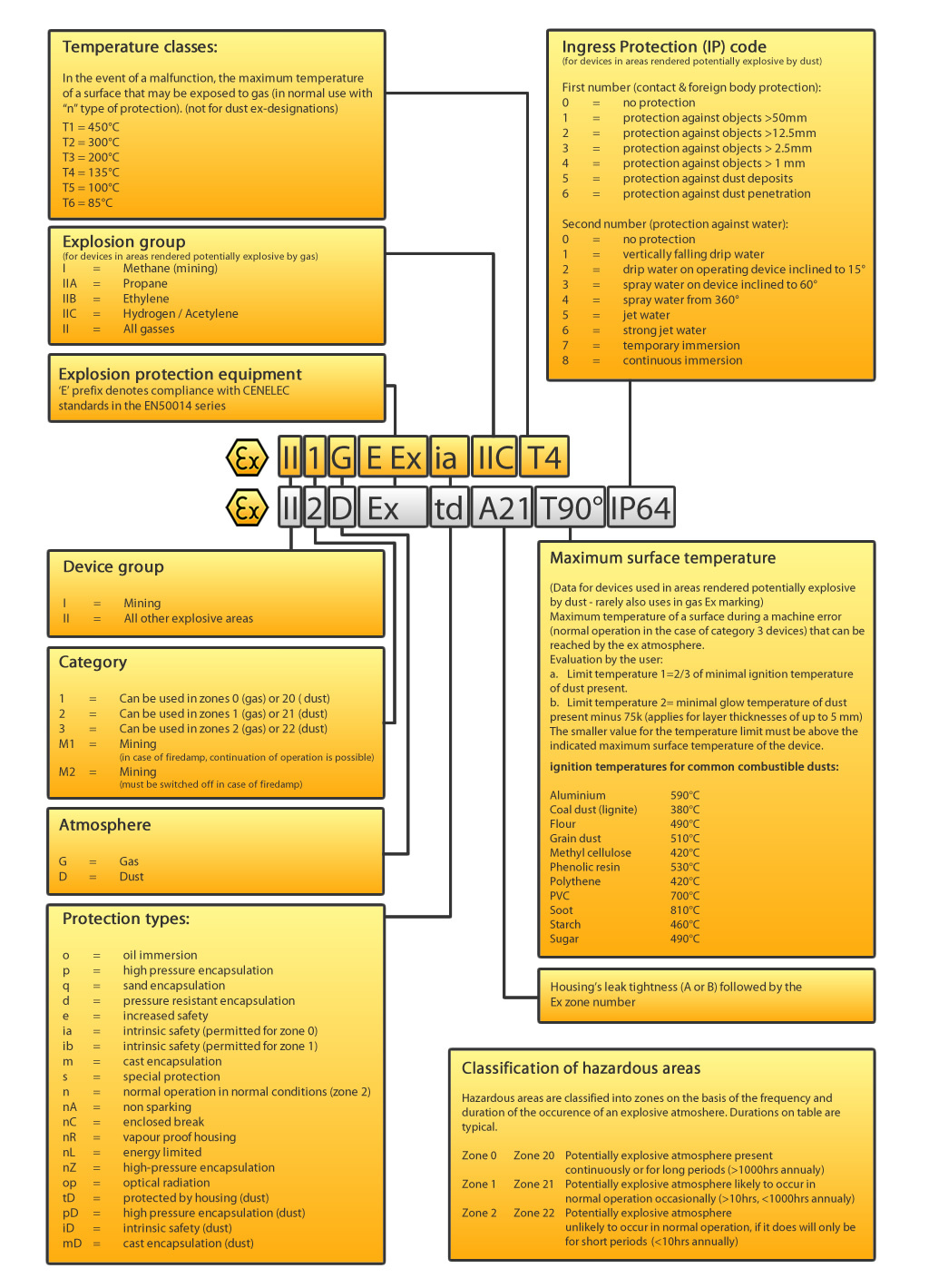